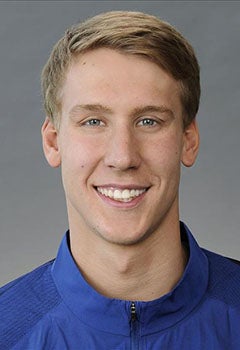 Chase Kalisz was the 2017 FINA World Champion in both the 200- and 400-Meter Individual Medleys, and has ranked among the world’s top IM swimmers since bursting on the international scene while still in high school.


By earning double gold at the 2017 Worlds, Chase became the first male swimmer since Ryan Lochte in 2009 to win both Medley events. In the 400-meter IM he set a new Championships record — besting the mark set by Michael Phelps a decade prior.


Prior to that, Chase was a silver medalist at the 2016 Olympic Games, a four-time NCAA champion at the University of Georgia, and winner of the men’s series title at the 2017 Arena Pro Swim Series.


Chase joined the USA Swimming Foundation as an Ambassador in 2017.