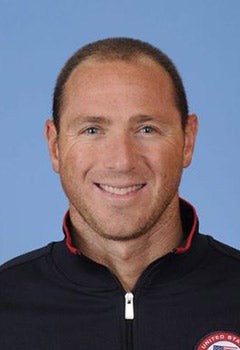 “I experienced the national team financial support, which was absolutely necessary to support my post-collegiate career. As a father of three, the saving lives piece of the USA Swimming Foundation’s mission has taken on a very personal meaning. It was a no-brainer to get involved.”


Jason Lezak is a two-time Olympic Team Captain and the hero of one of the most legendary swimming moments in history. At the 2008 Olympic Games in Beijing, Lezak chased down French rival Alain Bernard and claimed gold on the final lap of the 4x100-meter freestyle relay. On the biggest stage imaginable, the then 32-year-old clocked the fastest 100-meter freestyle split in history. The race was honored as the year’s Best Moment at the ESPY Awards.

Over the span of 16 years, Lezak earned U.S. medals in four Olympic Games, four Pan Pacific Championships, and 11 World Championships (Long and Short Course). His 2013 retirement capped a remarkable career in which he won 34 total medals (23 gold) in international competitions.

Lezak is married to retired Mexican National Team Member Danielle DeAlva, with whom he has three children. He travels the world as a professional speaker and instructor at swim clinics. Lezak has been a Foundation ambassador since 2015, making appearances all over the country and participating in both Youth and Adult Performance Camps.