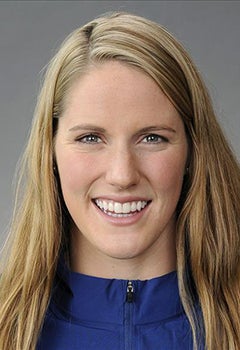 “From the first moment I became aware of the USA Swimming Foundation, I’ve been so impressed by its impact in ensuring children learn how to swim and be safer in and around the water. They are now, through the Make a Splash network of local partners, helping millions of children learn to swim and that number continues to grow every year. It is really exciting to be a part of an organization that is truly saving lives across the country.”


Few swimmers burst onto the international scene with as much velocity as Missy Franklin. Her Olympic debut at the 2012 Olympic Games saw the 17-year-old sweep the backstroke events en route to a five-medal (four gold) performance. She became the first woman to earn 11 career World Championships titles.


At the University of California Berkeley, Franklin was a four-time individual NCAA champion with wins in the 200-yard backstroke, 200-yard individual medley and 200-yard freestyle (twice). She was named FINA’s Swimmer of the Year in 2011 and 2012.


The 2014 documentary Touch the Wall followed Missy and U.S. teammate Kara Lynn Joyce in the lead-up to the 2012 Olympics. She also made cameos in the TV show Pretty Little Liars and the Owen Wilson comedy The Internship.


The Colorado native started swim lessons when she was just five years old — at the insistence of her mom, who was concerned about the dangers of drowning. In that light, Franklin’s current work as a USA Swimming Foundation Ambassador (a role she accepted in 2015) is an extension of her mother’s own proactive approach to water safety.