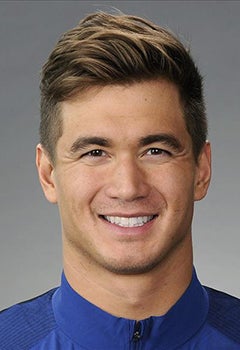 “I thought that everyone knew how to swim, but when I heard the statistics that 64% of African American children, 45% of Hispanic or Latino children and 40% of Caucasian children don’t know how to swim, I was shocked. I realized that I need to do my small part to make the world a better place and the USA Swimming Foundation is a great platform to make a difference.”


Nathan Adrian is an eight-time Olympic medalist and one of the most decorated American sprinters of his generation. He has played key roles in some of the fastest relay teams in history — including gold-medal-winning 4x100-meter freestyle relay performances at three consecutive Olympic Games.


A five-time individual NCAA champion, Adrian earned a degree (with honors) in public health from the University of California Berkeley in 2012. That same year, his hometown of Bremerton, Washington renamed a street “Nathan Adrian Drive.” In 2014, Adrian was inducted into The Robert Chinn Foundation Asian Hall of Fame.


Adrian has served as a USA Swimming Foundation Ambassador since 2014.