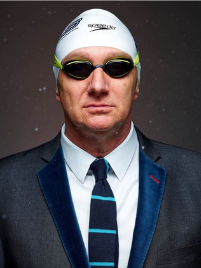 David Shackley currently serves as Vice President, Corporate Communications at Marriott International where he oversees the Creative Services, Corporate Events, Internal Communications, Corporate Social & Digital, and Multicultural Marketing teams. A marketing and creative leader, David has sold everything from iPhones to Speedos (and he uses both frequently).

David joined Marriott from Apple, where he was as the Executive Producer of Global Launch Events, and managed product marketing, design, communications, technology, creative and event production. While at Apple, David worked on the launch for the iPhone 7 and the first waterproof Apple Watch (which came in handy for his swimming)!

From 2013-2015, David was the President and Chief Creative Officer at RedPeg Marketing, where he was responsible for driving creative and agency, social/digital departments, and client services. While at RedPeg, David worked with clients, such as Geico, NBA and Mercedes, and produced over 1500 live events with the company.

Prior to RedPeg, David was the head of Marketing and Communications at Mark Burnett Productions, where one of his key roles was directing PR messaging, marketing strategy and creative leader for The BibleTV series, and delivered record-breaking ratings and DVD sales.

In the years before Mark Burnett Productions, David served as the Chief Marketing Officer at Discovery Channel, the world’s number one non-fiction media company, and he was responsible for developing creative and media strategies, leveraging advertising and promotional investments across broadcast, experiential, events, digital and print media.

From 2003-2007, David was the Vice President, Global Events and Promotions at AOL, where he led marketing and communications of national and international campaigns with a multi-million dollar budget across AOL’s brand portfolio. While at AOL, he produced the brand’s highest profile events, including the Super Bowl, SXSW, NASCAR, and the Live8 concert series, and worked with top artists, such as Coldplay, Madonna and Amy Winehouse.

Earlier in his career, David held positions in event marketing and media planning at companies like Omnicom Group and Catalyst Events, all going back to his start at Speedo UK. When he’s not at work, you’ll either find David at home with his family or in the swimming pool training for the 2020 Tokyo Summer Olympics (a guy can dream, right?).